by Ze Mario in Portugal from BGG:

I read somewhere that this is the ideal scenario for learning the game, so we decided to play it. Hugo had already fixed the map with the missing rice paddies, so we gave it a go. For no particular reason, I got the Ikeda Army and Hugo, Tokugawa’s.

Tokugawa’s army begins with three contingents. Tokugawa begins on the top of a large hill, surrounded by rice paddies. It seems a pretty hard position to attack. Imagine the battlefield from my point of view, Tokugawa’s on my left, with 15 units.
On the right are his other two contingents. We have a long valley across the battlefield, and on the right, Naomasa is on extreme side of the valley, near the mountain to the north. Oda’s behind that mountain, a bit far from the area where the action is going to take place on a near future.
My army, Ikeda’s, has 4 contigents. On the left side, I have Mori, that I’m guessing is supposed to battle Tokugawa. The problem is that the army of these two that decides to strike the other has to cross the rice paddies, which will take a long time during which they’ll be exposed to range attacks in the meanwhile. On the right of Mori, is Ikeda’s contigent. Across the valley, opposite to Naomasa, I start with two contigents Yokisuki, and Terumasa. On this side, it seemed clear to us that Naomasa was supposed to hold Yokisuki and Terumasa’s attack until Oda forces arrived to help him out.

I marched Yokisuki and Terumasa across the valley to hit Naomasa while he was alone. I was hoping to eliminate that contigent before Oda arrived, since they still had a long way and rough terrain to cross. When they got in range, they were saluted by archers and gunners, and my own returned fire. Oda’s forces began their cross-country march.

Yokisuki and Terumasa continued to walk, and they finally hit Naomasa’s men. Both sides sustained a more or less equal damage. Maybe it shouldn’t have been like that, but I guess we’re still amateurs with the maneuvers. Oda continued to march. The left side of the battlefield is asleep.

END_OF_DOCUMENT_TOKEN_TO_BE_REPLACED

It takes place somewhere in Northwest Anatolia.The set up shows the initial dispositions. The Crusaders are somewhat out-numbered initially but have significant reinforcements on the way from the west.

To begin, Robert of Normandy has a formation of Norman knights and then Bohemund of Taranto Sicilian Norman knights. These are diffucult to knock out. The weak area is the right flank where Peter the Hermit has an array of camp followers that have nothing to offer to the battlefield. The reat of the vulnerable formations are encamped behind the lines of knights.

Eventually, Raymond of Toulouse will arrive from the west with the Aquitaine knights, followed by Adhemar of Le Pay, with his Provincial knights. Then Godfrey of Bouillon with Burgundian knights and Robert of Flanders with a formation of Flemish knights.Last, Hugh of Vermandois with Lorraine knights, if he makes it in time for the battle.

Meanwhile, the Seljuk army is lead by Kilij Arslan I. His forces are mostly Sedjuk cavalry. Much of the forces are archers with no shock ability at all. They mainly use ride up, fire arrows, and ride away tactics. The knights stand up against this well, but the camp followers and pike infantry, not so much. 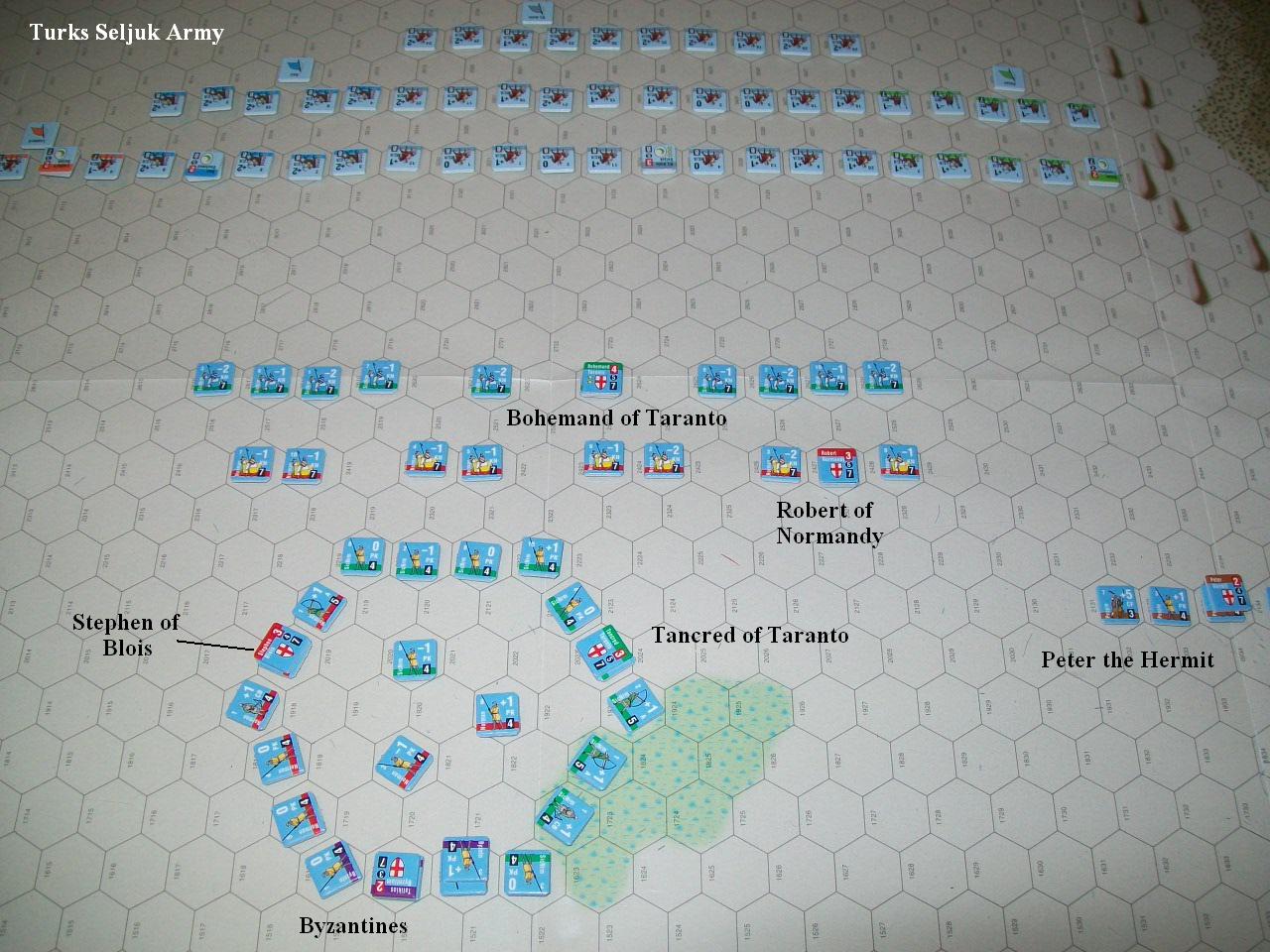 END_OF_DOCUMENT_TOKEN_TO_BE_REPLACED

Reposted with kind permission by Tankboy from BGG. Tracey does an excellent job of leading us through his game. His thought processes, as well as the game mechanics blend together nicely. All enhanced with stunning pictures.  I trust you enjoy this as much as I did, and we look forward to more from him.

Welcome to my initiation to the Glory that is Great Battles of History – SPQR. This will be the first to what I hope will be many AAR’s of all the SPQR battles from the Deluxe Edition, Players Guide and C3i Magazines.

I’ve asked quite a few questions on this forum regarding the rules to this massive-in-scope game, and have been answered very well. I hope you all will continue to explain things (correct my mistakes) as you read along this AAR as I play out this 1st Battle. Many thanks in advance.

…..AND THE ANCIENT GODS DECREED “LET THERE BE BATTLE!”

…AND THERE WAS BATTLE.

END_OF_DOCUMENT_TOKEN_TO_BE_REPLACED

46 of the Forty-seven Ronin commit seppuku (ritual suicide) as recompense for avenging their master’s death.

Seems appropriate we honor thier honor by sharing one of Merric Blackman’s great AARs from the GMT GBoH series related to Japanese Feudal times. This ties in with our Sekigahara and upcoming RAN series of plays.

A few years ago, when I first acquired Samurai, already a veteran of SPQR, I became very, very confused by the rulebook. The activation rules were arcane, and what was with the samurai challenges? So, after looking at the maps and scenarios, I put it away and wandered off to play some Tyrant scenarios. And then some other games.

A couple of weeks ago, I picked up the rules to Samurai again and went through them. And they weren’t difficult at all. A few years of seasoning had exposed me to a number of new mechanics, and now the way that everything worked seemed quite logical and clear.

So, popping out a few counters and unfolding the map, I settled on playing through the scenario of Mikata-ga-hara, when Tokugawa Ieyasu found himself outnumbered by the great army of Takeda Shingen. The battle is one which has Tokugawa Ieyasu very much on the defensive: his goal is to inflict enough damage to make three clans of his opponent run away, then escape himself without losing three clans of his own. As it goes, it’s quite an atypical battle for the Samurai system, with no Rout Points used as in the other five battles. However, I hoped it would give me some feeling for the system.

Takeda Shingen’s Army to the top of the picture, Tokugawa Ieyasu’s to the bottom.