Collated from a Vassal play a while back. I made a video of the game play but lets take a slightly closer look….

I’m thinking setup away from the zones he needs, and allow my Turn 4 reinforcements to “recapture” a hex. So rather than setting a up big gun fight for the Factory, we are going to secure the approaches and try and keep as much of his force out of the building, so that the US can assault into a hex and claim it on the last turn, or hold a hex near the end for the win.

The enemy swoops in on Choppers and nearly always lands in the same small handful of places. By leaving the VP location unguarded we also tempt them to not leave a blocking force in the Steepled building on my approach route for Turn 4-6.

Soviets must capture ALL the building hexes to win!

We estimate accurately where he will land,

but fail to account for poor die rolling on our part.

Above the Soviet choppers light up men and generate heroes for the US, who are subsequently killed in a Su 25 bomber run!

Locked in Melee in Turn 3, we are blocking forces, but are not able to support the reinforcements in Turn 4. These fireteams would have been closer to the action downtown.

Depositing men in town, we look to secure the city once more.

We are sadly a bit exposed on the move due to poor range counting.

We shoot too soon. The M113 attempt to overun  but is torn up by Soviet MG fire. The VP hex is under our control, but we have bad guys adjacent….

The Hind finishes us off.

This indirect strategy almost worked. If not for poor execution we had the enemy confused and unsure as to what our intent was. This caused some unforced errors on their part. But shoddy play prevented the  US from taking advantage of the situation.

Thanks to Tyler BGG id Whisky_Bear for submitting this fine AAR!

My regular LnL buddy had to cancel on me this afternoon, citing honey-do responsibilities. As a newly-wed of eight days myself, I know the feeling exactly — so I took to some yardwork in the morning so I could set about watching golf and playing games by myself all afternoon. Though I consider myself a veteran to the LnL system, I am very much a beginner to Forgotten Heroes. What follows is my third crack at the game, and first go solo.

Scenario: A Friend in Need

This scenario, a one-mapper with few units and no helicopters, appealed to me for its simplicity. Two American platoons look to root out suspected VC in a village in the A Shau Valley in a game that spans eight turns. The Americans and Lt. Jenson are opposed by three VC squads, but a further two squads of NVA regulars soon appear west of the village. All in all, it’s a pretty even fight. Victory conditions are simple: Both sides receive 1 VP for control of each of four buildings on the board at the end of the game. The Americans receive 1 VP for each MMC and SMC eliminated; the VC receive 2 VP for the same.

Turn 1: The Americans divide in half, with Lt. Jenson taking his platoon north of the main road to deal with the NVA. A second platoon heads south and captures the ridge west of the village, wary of a flanking attempt by the VC through the jungle.

Just a quick shot from the 2nd game. This time Salem manages the Weapons team. It takes out 2 BTR’s. But a third and the T55 close in. Being spread out is not helping the defense either. 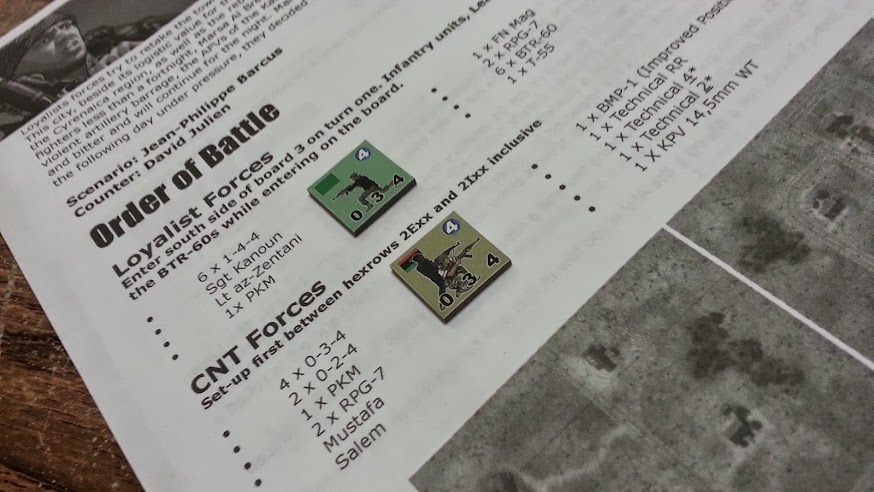 “Listen to Salem brothers” said Mustafa quietly. His deep voice echoed in the silent room. The stench of sweat and fear mingled with cigarette smoke. There was a tense silence in the room full of warriors, well men with guns really. Despondent, desperate men who had little to lose before the civil war and less so now. Bedraggled, torn shirts stained with sweat hung over soiled worn pants, with boots covered in concrete dust and dirt. 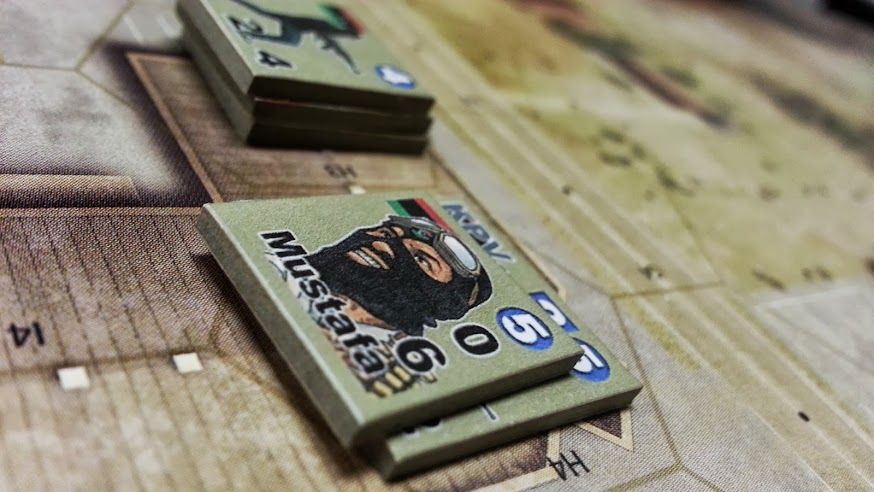